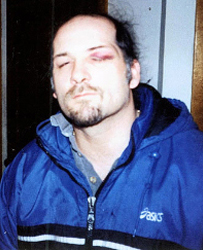 Mr. Reynolds was pulled over by a New York State Trooper on suspicion of a suspended license. The Trooper had called 911 which reported Mr. Reynolds’ license was suspended as per DMV computer records. Mr. Reynolds repeatedly told the officer his license was in his wallet but the officer refused to allow Mr. Reynolds to show it. The Trooper forced Mr. Reynolds out of his vehicle, handcuffed him and rammed his head several times into the trunk lid of the vehicle he was driving. After Mr. Reynolds was assaulted, the Trooper looked in Mr. Reynolds’ wallet and found a valid temporary New York State drivers license which was issued ten days prior. After assaulting Mr. Reynolds and placing him in the back of a police car, the Trooper uncuffed Mr. Reynolds and let him go. Mr. Reynolds promptly went to a local hospital for medical treatment for his injuries and he went to the police barracks where photos were taken. Separate liability and damages trials were conducted in the Court of Claims in Syracuse, New York. Following the liability trial, the Court held that the Trooper committed battery and used excessive and unlawful force on Mr. Reynolds’ person. A separate damages trial was held in which Mr. Reynolds established that he had suffered a swollen, bloody, and blackened eye, chronic and severe headaches, blurred vision in his left eye, dizziness, stuttering, and cervical herniated discs at the C4-5, C5-6 and C6-7 levels which will require cervical discectomy and fusion surgery performed in two separate procedures. The Court also found that Mr. Reynolds suffered a swollen and blackened left eye, a closed head injury (leaving a permanent bump) resulting in concussion-like symptoms. The Court also held that Mr. Reynolds also suffered insignificant injuries to his wrists where the handcuffs were placed on him. The Court awarded Mr. Reynolds a total of $1,017,500 for past and future pain and suffering and medical expenses. Appeals were taken concerning the issue of damages and on June 20, 2014, the Appellate Division, Fourth Department, unanimously affirmed the damages award and Judgment of the lower Court.