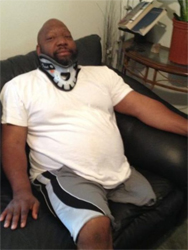 This is an excessive force case which was tried in the United States District Court in Rochester, New York. On May 1, 2013, 52 year old Benny Warr was a one leg amputee who wore a prosthetic leg and utilized an electric power wheelchair for traveling distances. On May 1, 2013, Mr. Warr resided two (2) blocks away from the intersection of Jefferson Avenue and Bartlett Street in Rochester. On the evening of May 1, 2013 Mr. Warr went to a store at this intersection where he purchased ice cream. He then backed his wheelchair up to the Swan Bridge Building on the east side of Jefferson Avenue where he ate his ice cream while speaking with a friend of his nephew who was sitting on a step next to him. A couple minutes later, Rochester Police Officers Joseph Ferrigno and Anthony Liberatore drive by in a police vehicle yelling at people on the sidewalk to leave and move on pursuant to the City of Rochester’s longstanding policy “Clearing The Block” where police officers are authorized to clear the sidewalks of citizens in high crime areas. When the officers drove by, Mr. Warr decided to leave the east side of Jefferson Avenue and go to the bus stop on the west side of Jefferson Avenue to visit friends who had just moved down the street. Mr. Warr waited at this bus stop for approximately nine (9) minutes with Tache Young and his nephew’s friend before Officers Ferrigno and Liberatore crossed from the east side of Jefferson Avenue and approached them at the bus stop. When the officers approached Mr. Warr, they demanded that he leave. When Mr. Warr told the officers he was waiting for the bus, one of the officers replied back “f_ _ _ en move”. At this time, Mr. Warr again responded that he was waiting for the bus. At this point, Officer Ferrigno maced Mr. Warr’s face. Officer Liberatore then suddenly and violently pushed Mr. Warr’s motorized wheelchair over causing Mr. Warr to fall and slam onto the sidewalk on his left side and stump. The incident was video recorded on a cell phone by Tache Young and posted on youtube.com. The incident was also caught on Blue Light Camera video which was installed by the City of Rochester at this intersection. After Mr. Warr’s body slammed onto the ground, his prosthetic leg flew off and the police officers jumped on Mr. Warr and began striking, kneeing and/or kicking him in the stomach, chest, back, head and other areas of his body while he was lying on the sidewalk. The Blue Light camera video showed Officer Liberatore looking to this right and left before delivering an elbow strike (an “untrained technique” as per RPD standards) to Mr. Warr’s head as he was lying defenseless on the sidewalk. The Blue Light camera footage also showed Officer Ferrigno delivering knee strikes to Mr. Warr’s abdominal area as he was lying helpless on the sidewalk. After this physical encounter, Mr. Warr continued to lay on the sidewalk for 25 minutes before an ambulance arrived and transported him to Strong Memorial Hospital for medical treatment. The officers followed the ambulance to Strong Memorial Hospital where they issued Mr. Warr appearance tickets for disorderly conduct (accused of directing obscene language towards officers which Mr. Warr denied) and resisting arrest. Both charges were eventually dismissed when an adjournment in contemplation of dismissal was granted by Rochester City Court. This civil rights case was filed on September 19, 2013 against the named police officers and City of Rochester.

This case was tried before a jury from January 22, 2019 through February 4, 2019 before Magistrate Judge Marian W. Payson. At trial, Mr. Warr presented medical proof that he suffered non-displaced fractures of the left 7th, 8th and 9th ribs, a left stump a traumatic brain injury causing Mr. Warr’s word finding problems, cognitive changes, persistent headaches and memory loss, post-traumatic stress disorder, a left stump complication which has permanently taken away Mr. Warr’s ability to walk using his left leg prosthesis due to pain, moderate to severe carpal tunnel syndrome in the left and right wrists due to use of crutches and aggravation of his cervicalgia, cervical stenosis and degeneration in the cervical and lumbar spine. At trial, claims pursuant to 42 USC §1983 and state law were made for false arrest, excessive force, assault, battery and loss of consortium. The jury found that Officer Anthony Liberatore violated Mr. Warr’s civil rights under the Fourth Amendment by using excessive and unreasonable force against him but they refused to award any compensatory damages to Mr. Warr. The jury decided to impose punitive damages against Officer Liberatore for his misconduct but refused to award any punitive damages by giving $0. All other claims against Defendants were rejected by the jury. Although experts from both sides agreed Mr. Warr suffered physical injury and post traumatic stress disorder, the jury refused to award compensatory damages. The jury only awarded $1 in nominal damages.

MOTION FOR A NEW TRIAL

Following the jury verdict, on March 4, 2019, Plaintiffs filed a motion for a new trial arguing that the punitive damages award was inconsistent, that there was uncontested proof of damages, the verdict was a miscarriage of justice and the product of undue and unfair misconduct on the part of the Defendants’ attorney. Plaintiffs asked for a new trial, monetary sanctions for the alleged attorney misconduct and an order barring Defendants’ attorney from appearing at any retrial. Plaintiffs motion was denied by Magistrate Judge Payson’s orders entered on March 20 and 30, 2020 which (1) found the jury’s failure to award compensatory damages to be consistent with the weight of the evidence, (2) rejected the argument that the lack of a punitive damages award was inconsistent with the determination that punitive damages were proper, and (3) agreed with Plaintiffs that that Defendants’ attorney had committed misconduct during the jury trial but imposed only monetary sanctions against him instead of granting a new trial and disqualifying him at a retrial.

Plaintiffs filed a notice of appeal from the March 20 and 30, 2020 orders denying their motion to set aside the verdict and grant a new trial. This appeal is currently pending before the Second Circuit Court of Appeals. Plaintiffs have alleged that (1) the Magistrate abused her discretion in allowing the introduction of evidence about the Defendants’ impressions about drug and other crime problems in the area where Mr. Warr was arrested; (2) the misconduct of the Defendants’ trial attorney was flagrant and pervasive and made it impossible for the Plaintiffs to receive a fair trial; and (3) the jury verdict with respect to punitive damages was fatally inconsistent, and the trial court erred as a matter of law by refusing to grant a new trial to set damages. Plaintiffs argued that the Magistrate’s evidentiary ruling led the jury to accept the Defendants’ opinions about criminal activity on Jefferson Avenue as fact, although none of this testimony had any relevance to the crime for which Mr. Warr was arrested (directing obscene language at police officers which Mr. Warr denied) and its prejudicial effect far outweighed its probative value. Plaintiffs argued on appeal that there was no evidence that Mr. Warr was engaged in any criminal activity, that Defendants’ attorney used this evidentiary ruling to support his own highly improper appeal to juror prejudice and passion, implying that Mr. Warr was engaged in drug dealing and criminal activity in the Jefferson Avenue corridor and portrayed him as unworthy of compensation. On appeal, Plaintiffs argue that the combination of these flaws deprived them of a fair trial and indeed put them on trial instead of the Defendants. All briefs have been filed and the parties await oral argument and a decision from the Second Circuit Court of Appeals on whether a new trial will be granted on the issue of damages and if so, whether Defendants’ attorney will be disqualified at the retrial. It is anticipated that this appeal will be decided sometime in late 2020 or early 2021.